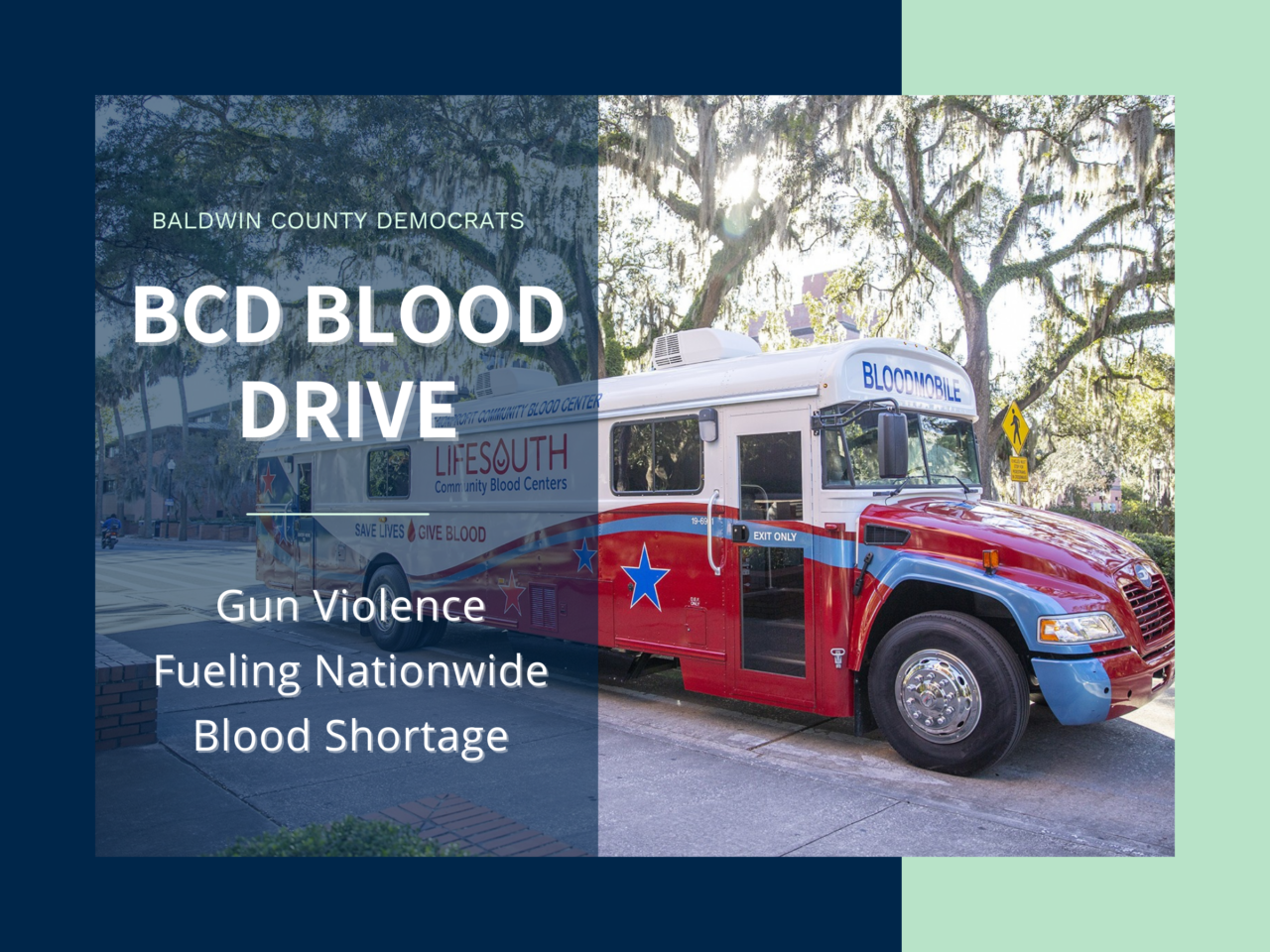 At a time when surging gun violence is taxing blood supplies in Gulf area hospitals, Baldwin County Democrats are rolling up their sleeves to boost local blood stockpiles.

“It’s always one of our most successful drives of the year,” he said.

This year, LifeSouth is hearing from hospital officials that gun violence is climbing up the list of traumas that call for transfusions, LeJune said.

“Summer and July Fourth are always times of high need for blood because people like to drink and then drive in their cars,” he said. “But this year gun violence is putting a really pulling on the system.”

LeJune didn’t have numbers of local gunshot victims seeking treatment in Baldwin County ER’s. Still, he hears what the hospital representatives he works with are telling him. And it’s not hard to see the writing on the wall.

“Just read the news,” he said.

The news tells us the gunshot-driven blood shortage isn’t just a local problem. It’s a nationwide trend. And a new study – one of the first to assess blood transfusion needs among gunshot patients specifically – gives us some sobering numbers.

Gunshot patients need 10 times more blood than survivors of other traumas, including car accidents, falls, and stabbing assaults according to the new study published this month in Transfusion Journal. And blood doesn’t come cheap. The average cost of transfusion per gunshot patient is about $11,300 – almost twice the $5700 for any other type of trauma patient.

The study comes amid a scarcity of blood at the nation’s blood banks. The findings offer a blueprint for how hospitals — especially urban trauma centers in cities with high rates of gun violence — can prepare to treat shooting patients.

“We had no idea how much blood was going to support gunshot victims because no one’s ever reported that,” said Steve Frank, a professor of anesthesiology and critical care medicine at Johns Hopkins Hospital in Baltimore, who authored the study along with other Hopkins medical faculty.

“We were surprised by the magnitude of the difference in blood use.”

As the Supreme Court opens the door to more people carrying guns outside their homes and Alabama welcomes its new permitless carry provision, it seems Second Amendment expansions are literally taking their toll in blood.

Yet, for the first time in three decades, there is some bipartisan movement on gun control laws. In June, President Biden signed into law a minor tightening of gun regulation expanding background checks on gun buyers under 21 and expanding funding for mental health interventions.

Baldwin and Mobile County emergency rooms are often down to a three-day supply of blood transfusions, Le June said.

“This is our chance to show our neighbors who we are, what we are made of – that, first and foremost, Democrats support our own community,” Chrissie Hines, event organizer, said.

You can be part of the solution by giving blood on July 16. Each donor will receive a $20 E-Gift card and a tree will be donated in their honor.

We can go to the polls to find a better solution.

“The results from Kansas are definitive proof that when progressives unite and work as a team, we can be successful in pushing back against the radical agenda of today’s Republican Party,” Fisher said.

The Kansas vote was a boost of optimism for Democrats banking on their belief that opposition to the recent Supreme Court decision overturning a half a decade of pro-choice precedent would galvanize opposition and drive voters to the polls. The Kansas referendum sparked a surge of new voters, with more than 800,000 turning out, blasting out the 470,000 who turned out for 2018 gubernatorial primary, according to numbers published in The Guardian.

The referendum sounds a warning to a Republicans looking to drum up anti-abortion sentiment when, even in the ultra-red states like Kansas, voters largely support abortion rights.

“Tonight’s result speaks for itself: the majority of Kansans rejected Republicans’ assault on the right for women to make their own health care decisions and believe that abortion should be safe and legal. Kansas Republicans’ attempt to lay the groundwork for an extreme and wildly unpopular abortion ban failed,” Democratic Party leader Jaime Harrison said in statement Tuesday night.

“While the fight to defend abortion access in Kansas and across the United States is far from over, today’s victory is a reminder that voters will hold Republicans accountable for their extreme anti-choice agenda,” he said.

Alabama leaders probably won’t offer us the courtesy of a referendum. Just like with reproductive health decisions, they choose to make our choices for us. But we can still weigh in on who is making the decisions by voting for pro-choice state and local candidates.

“Our objectives must include organizing around specific issues within the Democratic Party, such as a woman’s right to make her own reproductive healthcare choices,” Fisher said.

“By building passionate volunteers and galvanizing our movement, we can roll back these efforts and gain ground in all locations, including traditionally conservative states,” he said.

You can catch Brackner ‘s virtual
town hall on Facebook at
https://m.facebook.com/Vote4Richard and Google Meet.
Anyone who doesn’t have Facebook can email Brackner at richard@richardbrackner.com and Richard will send you a link for Google Meets

Each month, the BCD Newsletter offers up an overview of the most newsworthy highlights from county commission meetings and actions. Watch this space to stay in the loop on just what our commissioners are up to.

This fall, Baldwin County voters will decide whether to give the county more authority to act on health and safety issues in unincorporated areas.

In a unanimous vote, Baldwin County Commissioners in June approved a resolution that would add a local referendum item for a vote during the general election in November.

The act, known as the Alabama Limited Self-Governance Act, allows counties to exercise health and safety powers in unincorporated areas of a county.

Commissioners said the county frequently gets calls about people creating health hazards on their property, such as junkyards, unsanitary sewage, noise, litter and rubbish, pollution, overgrown weeds and animal control. But the county is powerless to do anything about them.

“In order for us to answer to the public, and I think in a fair way, we’re asking the public what’s your opinion instead of just forcing laws on the people,” County Commission Chairman James “Jeb” Ball said.

Alabama is one of just a dozen states that does not give a county the authority to deal with these kinds of issues, Commissioner Billie Jo Underwood said.

“It’s frustrating for someone to have a place in the country and that does definitely cause all kinds of problems from rodents to devaluing your neighbor’s property to just not safe,” she said.

“We don’t have the ability to really do anything about that right now,” Underwood said. “This just gives us the opportunity to address one or all of these items”

“We’re not gonna have any whoopin’ and hollerin…’”

Chairman James “Jeb” Ball at the June 21 meeting, setting ground rules for a July 19 hearing on a hotly-debated zoning decision for subdivision approval in the Belforest area near Daphne.

Also ruled out is clapping and the display of flags and banners reading “Don’t Tread on Me,” or anything else. And Ball certainly does not want to hear any booing.

Public comment will be restricted to one spokesperson for each group and a five-minute time limit.