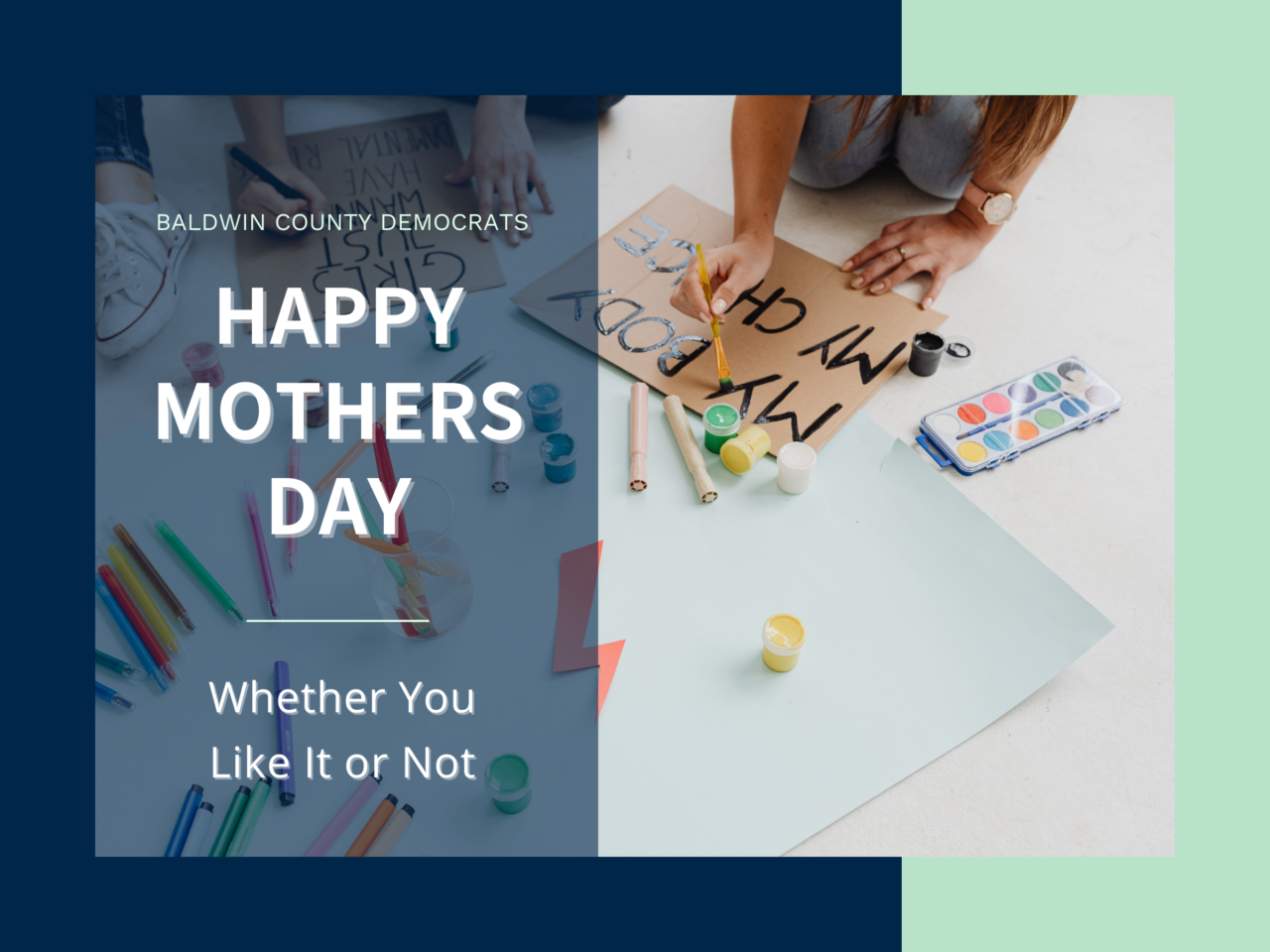 “Some of these women, including myself, are having to revisit these traumas as the nation debates control over our own bodies,” she said. “Politicians, religious leaders, and lawmakers don’t seem to care at all. They aren’t interested in protecting women or victims. This is why I’m here today.”

Alabama Democratic State Chair Chris England said laws passed by our Republican legislature will render abortion services illegal in Alabama. Abortion would be a felony that could leave doctors facing up to 99 years in prison for providing medical care to their patients, he said.

“Yet again, Republican legislators and appointed judges think they should be sitting between you and your doctor while making medical decisions,” State Rep. England said.

Local reaction to the Roe revelation was swift and strong.

“Life, liberty and he pursuit of happiness are all reflected in the right to choose and this opinion to overturn Roe v. Wade is an assault on all three,” said Richard Brackner, Democratic candidate for State House of Representatives District 95.

“Life, because the U.S. has an abysmal maternal mortality rate. It’s the highest in the developed world.”

“Liberty, because the right to choose is a liberty – plain and simple.”

“And the pursuit of happiness because women should be able to choose whether to pursue the mantle of motherhood or abstain from it,” Brackner said.

Right now, Baldwin County women have to travel to New Orleans or Montgomery to access a safe abortion, he said.

“We cannot make it harder and more dangerous for women to exercise such an important freedom,” Brackner said.

England predicts Republican politicians will claim the groundbreaking decision as a win for “life” in a state with high infant mortality rates, a maternal mortality crisis, and countless other public health crises.

“They refuse to expand Medicaid, providing free lifesaving healthcare access to Alabama families – or do anything else that actually sanctifies life for Alabamians. Now, their law will block abortion access in Alabama, negatively affecting women with the fewest resources the most,” England said in a release.

When Alec Barnett sees Baldwin County, he sees beyond our beautiful beaches and busy byways.

He’s smelled the stink of what neighbors call the “cesspool” in the center of the Buehla Heights neighborhood in Foley.

He’s gone to court to take on schools that put special needs kids like his son in solitary confinement closets, known colloquially as black boxes.

He sees the reports showing asbestos and mold in a public housing complex. He hears from struggling renters who still can’t get federal rental assistance money sitting unused in county accounts largely controlled by county commissioners’ relatives and cronies.

Barnett, a long-time activist and current president of the Baldwin County NAACP, is a Democrat launching a campaign to be the first African American county commissioner in more than three decades. He’s vying for the seat in District 4, held by Charles “Skip” Gruber since 2006.

“I’m a people person,” Barnett said in a recent interview.

“We can’t fix all Baldwin County’s wants,” he said. “But we ought to be able to fix its needs.”

Barnett may not be slick and polished. But he’s the real deal. His unpretentious style belies a lengthy legacy of statewide service and accomplishment.

He’s been stepping up to the plate for decades.

He began working the fields alongside his mom when he was only 10. From the RC Craft gladiola farm in Gulf Shores, he moved on to picking pecans, pitching hay, and digging potatoes as a teen after school.

He “got enough of working in the fields,” and went to work for Gulf Shores State Park, later in life launching a carpet cleaning business, King Carpet Care.

Barnett lived through the turbulent integration of public schools at the Foley Aaronville School and Foley High. He’ll never forget walking into the Foley Dairy Queen as a youth and being told he needed to come in through the back door.

“I had a problem with that,” he said. “There were a lot of fights during those days.”

Barnett is still fighting. This time it’s for the county commission seat of the man he says once looked him in the eye and told him – in the face of a class action lawsuit – the “black box” would persist as punishment in Baldwin County

Environmental stewardship, advocating for minority and disabled students in public schools, and protecting taxpayers by holding elected officials accountable are the latest struggles he’s stepping up to take on in Baldwin County.

Barnett and his wife Elva were on their regular volunteer shift making copies for Foley Intermediate School one afternoon in 2013 when a teacher burst in to tell them their son, diagnosed with ADHD, was serving time in a dark closet known as the black box.

That was the spark that ignited his passion for protecting vulnerable students – largely kids of color and disability – from widely-accepted practices in local schools that many called abusive. He, along with several other families, spearheaded a lawsuit against the Baldwin County School Board that was eventually dropped on a missed filing deadline.

In 2018, Barnett teamed up with parents of gay students in a march to the county courthouse in Bay Minette. Their mission was to shine a light on school officials who were ignoring bullying reports and failing to hire enough teachers trained to work with students with special-needs children.

That’s the zeal Barnett brings to enlightening local education. He’s for funding more services for kids with disabilities, making sure all students feel accepted in the classrooms, and raising teacher pay to attract highly trained teachers. He wants the county to invest in better childcare and after-school programs for all of Baldwin County’s young people.

“People joke that, as long as there’s a Mississippi, we’re not last in education,” he said. “But it’s no joke. We need more qualified teachers who see kids as kids and not just a paycheck.”

On the county commission, he’d press for action on problems like deficient sewage systems in minority communities where neighbors say they can’t sit outside for the stench and don’t dare drink the water. He’s worried about pollution surrounding the Magnolia Landfill off Highway 49, where Barnett believes turning waste into fuel is likely contaminating the soil and the air.

He advocates for updates to public housing that will purge toxins like asbestos and mold that may be contributing to high rates of cancer and lung disease plaguing low-income areas.

“People don’t want to look at the dirty little problems that come with fast growth and development that isn’t well thought out,’ he said. “It’s the poor and minority communities that get left living with the mess.”

Barnett has put in decades proving that, when it comes to holding elected officials’ feet to the fire, he’s a guy who walks the walk. From filing lawsuits challenging good ol’ boy government to organizing marches that shine a spotlight on suppression of equality and diversity, Barnett is known statewide as the go-to guy to get it done.

It took 175 years for Baldwin to elect its first African-American county commissioner, Samuel Jenkins. It’s time to make Alec Barnett the next and put him to work at home serving all people – rich and poor, young and old, gay and straight, black and white, gifted and disabled – of Baldwin County.