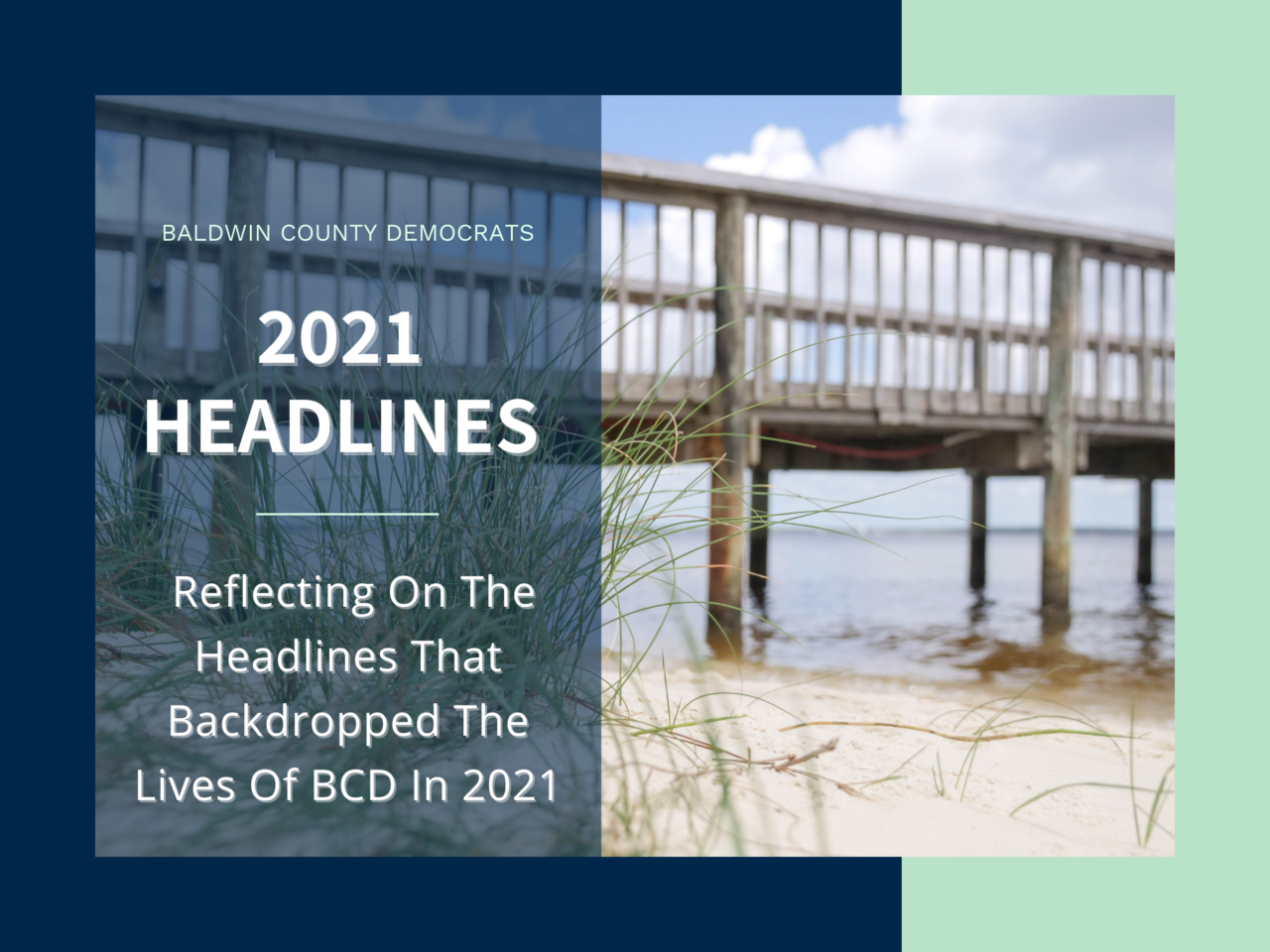 As we turn the calendar page, let’s take a few moments this first Sunday of 2022 to reflect on the headlines that backdropped the lives of Baldwin County Democrats through the year behind us.

When the 2020 Census figures came out, they showed Baldwin leading the pack of fast-growing Alabama counties. Its 22.5 percent growth makes Baldwin the fourth-largest county in the state. And Baldwin ranked just behind Madison County in total population growth, adding nearly 50,000 people over the past decade. We’re now home to about 232,000 people, according to Census data.

Four of the state’s 10 fastest-growing cities are in Baldwin County. Foley tops the list, with an astounding growth of 47 percent, adding nearly 7,000 newcomers over the last decade. In just one year, Foley logged 5.1 percent growth, swelling by more than 1,000 people between 2019 and 2020. Three other Baldwin County cities landed in the top 10 – Fairhope at No. 3, Gulf Shores at No. 7, and Daphne at No. 8.

School officials don’t look to political organizations for medical advice, Baldwin County School Superintendent Eddie Tyler shot back. “In fact, many would say the entire COVID situation has become far too political, and this is a prime example of that,” Tyler said in a written statement.

Within a week of the first day of school, Baldwin County topped state charts for school-age Covid cases with 640, five times higher than the highest amount last school year.

By mid-August, Superintendent Tyler reversed his decision and called for a mask requirement amid the wave of emptying desks throughout the district. At a public hearing Aug. 19, 40 people – 20 opposed to masks in school and 20 for masks in school – politely and respectfully voiced their opinions. The speakers ranged from medical professionals to school administrators and teachers, to interested parents.

While our local Baldwin County School Board is made up entirely of Republicans, five of seven board members backed Superintendent Tyler during the August 19th meeting, with one abstention.

Hundreds of Baldwin County parents e-mailed or called Tyler and sent notes to the school board members who backed him to thank them for doing the right thing for our kids.

The analysis is still being conducted on the 2022 Alabama Reapportionment Effort – also known as Redistricting. With a Republican supermajority in both legislative chambers, experts expected maps that heavily favored the GOP across the state. And true to form, the Republicans didn’t disappoint. However, there are several takeaways that Democrats in Baldwin should consider opportunities.

Spanish Fort now has a Democratic Senator. District 33, represented by Vivian Figures from Mobile, was drawn into west central Baldwin County – giving Democrats their first local elected official of their party persuasion. This was not without major consternation on the part of Republicans, but ultimately the map passed both chambers and was signed into law by the Governor.

The major unanswered question as of now is — why didn’t the GOP just draw Greg Albritton (District 22) into the 3 Baldwin precincts in Spanish Fort and take away the 3 Mobile precincts they assigned him? It’s a bit of a mystery, but we know a lot of horse trading occurred during this process. Nothing happens by accident in Montgomery, so we expect more to come out on this story in the coming weeks and months.

Baldwin went from 5 House seats (3 completely within county lines) to 7 House seats (4 completely within county lines). Massive population growth forced the redistricting committee to give Baldwin more representation in Montgomery. However, with the retirement of 2 House members from Baldwin (Harry Shiver and Steve McMillan), the communities of Foley and Bay Minette paid a large price as they have split 3 and 4 different ways, respectively, to help other districts achieve their population numbers.

Foley will now have 3 representatives within a few city blocks. Bay Minette will have 4 representatives in 5 miles across the city. These can create serious problems of voter confusion and fracture local communities of interest. We must do what we can to inform our voters what precincts and districts they will be in to ensure they are educated about who they can vote for in November 2022 and make the largest impact possible.

The upside to the redrawn House map is that they simplified House District 96 (Daphne), House District 94 (Fairhope), and largely House District 95 (Gulf Coast). Drawing the maps the way they did give each of those areas a slight Democratic bump based on past election history and trends. Of course, it will be up to us to field good candidates for each race and take advantage of the opportunities. But as our Democratic influence continues to grow across the county, so does our chance to shape the debate in these communities and beyond.

Congressional District 1 is essentially status quo. They removed the small sliver of Clarke County that was once included in the district and shaved some of Escambia County to make up for Baldwin’s growth. However, the highly gerrymandered “K” we all see on the map (click link below) is still very much intact.

With all the negative news about presidential poll numbers being down, state laws banning vaccine mandates, and a few other headlines we’ve been seeing, it’s worth noting that Baldwin is still trending blue and will continue to do so — as long as we stay organized. We can’t emphasize this enough. If we disconnect in 2022 and lose momentum, we will face a much larger challenge in 2024 and 2026.

The easy thing to do is sit on the sidelines and believe others will take up the slack; that your vote or volunteer efforts don’t matter. But that’s not how it works. The best action is to stay involved and feel good about making a difference in whatever way you can! Remember – political fortunes can turn on a dime (or a news cycle). What is up today is down tomorrow. We should go about our business applying the same level of activism we have in the last 3 election cycles that allowed us to achieve record numbers of voters in Baldwin County. THAT is how we will be the change we seek!

Sen. Doug Jones made a return visit to Baldwin County, the county that put him over the top in the 2017 Special Election and won him a much-deserved seat in the US Senate. He met with about 150 Democrats at a gathering in Foley.

At the gathering, Jones laid out a political strategy for the future: Play the long game, he advised.

In an effort to push the conversation toward the most important issues facing our citizens, “We need a candidate in every race,” Jones said.

Get Millennials and Gen-X’ers – who trend more diverse and progressive – to the polls. Alabama Democrats have a good track record of getting younger voters registered only to find that just a fraction of them actually cast ballots.

“Even if you vote for a candidate who comes up short, your vote counts,” he said. Leaving blank ballots on the table gives right-wing leaders an open door to passing “more and more Draconian laws.”

And keep a keen political eye on dollars and cents, Jones advised.

“There’s a new generation of business leaders out there for the taking,’ the Senator said. “Once they understand that Democrats are business supporters, at the end of the day they will all fall in line.”

In December CNN shined the national media spotlight on the impending dangers of the coal-ash pond at Alabama Power’s Plant Barry, The CNN investigation raised the specter of another BP-level calamity if Alabama Power does not move more than 21 million tons of toxic coal ash sitting alongside the Mobile River, Tensaw Delta, and Mobile Bay.

Mobile Baykeeper and others have contended for five years that the coal ash is a pollutant sitting in contact with groundwater, a violation of federal law. The ash also lies in the path of hurricanes, making it highly susceptible to a catastrophic spill.

You can read and watch CNN’s extensive report here.

Alabama Power has proposed leaving this toxic pollutant where it is near these crucial waterways and covering it permanently with an artificial cap for the indefinite future. The coal ash pond is a ticking time bomb, environmentalists say. A potential spill threatens the commercial and recreational fishing industries, the Port, real estate, and tourism in Coastal Alabama.

Alabama Power has refused to move the ash, or consider recycling it because capping the pond in place is cheaper. Yet other utilities have proven that there are better, safer ways to store this toxic waste – away from water and in modern, lined landfills.

But there is hope federal powers may intervene. Alabama Power’s permit from ADEM to “cap-in-place” on site has not been approved by the EPA, which recently suggested it may soon issue new guidelines on how coal ash can be stored.

“We understand the concerns about this facility in Alabama,” Michael Regan, director of the EPA, tells CNN. “The last administration’s leadership failed to act on these concerns. This administration will act to protect communities and based on my prior experience if there is coal ash in contact with groundwater, that’s putting the health and safety of communities at risk and requires our attention.”

Looking back is the easy part. Hindsight and all that. As the strains of Auld Lang Syne fade in our ear buds, we face the year before us.

For us, that means midterm elections. Pundits have foreboding predictions for the Democrats, but math man Nate Silverman of pollster FiveThirtyEight last week put Dems 3 points ahead overall.

Time to roll up our sleeves and prove the rest of them wrong.